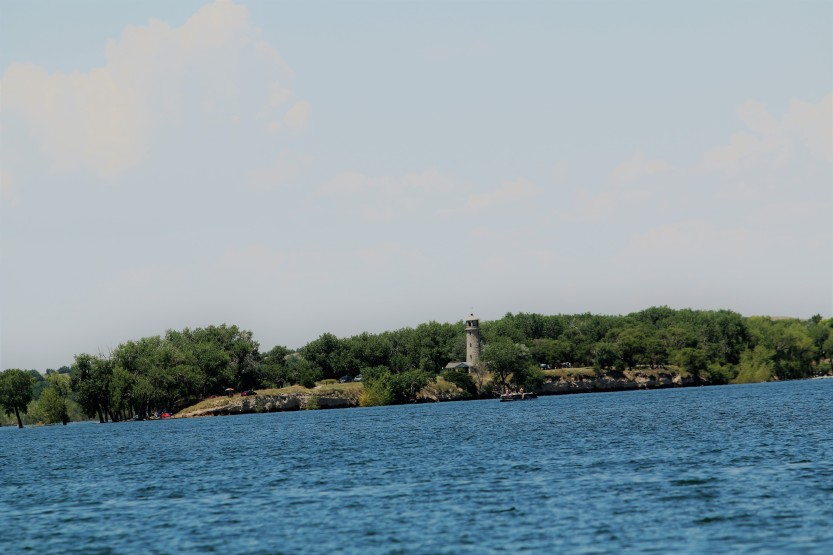 One of my first thoughts of visiting Lake Minatare after so many years was how long it took to get there when I was a kid – eternity times three. Sitting in a backseat with my two brothers made it a protracted adventure. Sitting between them risked a charley horse in the leg or shoulder when mom and dad weren’t looking. Crying out did no good because doing so earned another sock, even harder than the one before.

I didn’t have much luck leaning forward either. “Sit back!” dad yelled. “You’d go right through the windshield if I had to slam on the brakes.” Mom, staring out the window, nodded her head in agreement, seeing all the stop-and-go traffic, and no stern reminders of wearing seatbelts. My oldest brother chimed in with, “are we there yet?”

On a two-lane highway behind several other cars, the trip took longer, mom blaming us kids for the delay. “If you boys would have gotten everything in the car like I told you, we would have gotten to the lake sooner.”

I barely slept the night before, anxious about the mini-adventure as were my brothers, the first of half a dozen times we might go over the warm period of the year – enough material for back-to-school essays on what I did during my summer vacation, other than sluff off at the swimming pool, and watch a few legion baseball games at Oregon Trail Park.

This was the Fourth of July weekend, when finding car tire inner tubes to inflate became a major project and the focus of preparations, sans remembering to wear our swim trunks. Forget packing the hot dogs and marshmallows which became mainstay treats on the portable hibachi grill, that is if the cheap charcoal nuggets caught flame after soaking them with at least a can of lighter fluid.

That summer, I entered puberty – 12-years old, managing my own awkward growth and behavior, turning red at the sight of girls half clad in bikinis. This was the 1970s after all. Impressing girls became a futile chore. Because of the packed shores, my young uncle scouted the swimming area the night before to make sure we’d at least get a parking spot behind him. Dad skillfully backed our Ford sedan into the narrow parking lane filled with soft, hot sand cut into the berms that at one time surrounded the lake undisturbed.

Once the engine turned off, out of the car, doors swinging wide open, immediately, we trotted down the squishy paths to the small lapping waves, filling the nooks between our toes with sand, forgetting our minds. “Get your butts back here!” mom shouted. Stung by the order, we knew there was no other choice. Dejectedly, we turned back toward the car as dad popped the trunk open. “Where’d you guys think you were going?” He shoved the inner tubes at us. The old patched rubber caused them to lose some cushion, and we were glad he reminded us to bring a pump.

After we carried the Styrofoam cooler – the one with the white polar bear on the label – down to a patch of sand mom staked out using an old quilt near the edge of the water, we set to work on the tubes. Unbeknownst to us, there was something better. My young uncle waved us over and pointed to red canoes anchored on the shoreline. “Any of you know how to paddle?” he asked. “Yeah,” I volunteered. “They taught us something about that in Boy Scouts.” In truth, all I did was listen to instructions and a boring anecdote told by my scout master about how to hold a paddle, and sit in the hull of the boat without capsizing it, or as he put it, “don’t rock the boat, rock the boat, baby, don’t tip the boat over!” Sadly, he mimicked the lyrics to The Hues Corporation hit.

In lying to my uncle’s face about my maritime skills, he pointed to two girls from a neighboring camp eyeing the boats, waiting to see if someone could take them out on the lake, for a round of wishy-washy fun. One of them was a bleach blonde, and appeared to be a few years older than me, and reminded me of the Beach Boys “California Girls,” while her friend, a brunette was probably the more sensible of the two. The smarty pants brunette’s skeptical glances made me even more determined to show my deftness at steering the boat into the open seas.

My older brother and his friend took the two forward seats, while I sat on the last bench, the girls, seeking adventure sat between us. The blonde with huge brown wondering eyes, looked back at me. The canoe zigged, then zagged, as we struggled with getting in sync. The wide swipes of my paddle hit her several times on the back of the head. She answered with few complaints, but not really. She was glad I followed up with massaging her scalp.

The waves from a motorboat turned us sideways. My brother yelling out the number one rule of canoeing could do little to stop the brunette in our company from doing just that. “I don’t think you know what you guys are doing,” she said, panicking at the boat rocking back and forth, like we were caught in the middle of a frothy storm.

“Calm down,” my brother said. “And sit down! I’m not going to tell you again!” He sounded like mom dishing out threats. I waited for the “or else,” but it never came. Instead, she leaned too far and fell into water screaming until her splashy plunge left her gurgling. Her blonde friend instinctively stood up to save her friend, perhaps to avoid the knocks in her head from my paddle, too. Tumbling overboard, the canoe tipped far enough to get us boys leaning as well. Momentum against us, I opened my eyes to trout swimming by us and the bubbles from my brother and his friend.

The girls already had surfaced, grabbing on to the bottom of the boat, their feet flailing in front of our faces. Once they did see us, they stopped. The blonde girl’s expression said, “save me,” with upturned eyebrows and sad pout, while the brunette seemed to be saying, “if I drown, it’ll be your fault, and you’ll never live it down.”

My brother suggested we try to turn the boat so we might continue our little adventure, but admittedly, three young boys couldn’t do the trick. Plus, the pressure to perform, left me; it evaporated like the sprays of water into nothingness. I guess I wasn’t the man I thought I was. I wasn’t a man at all – not yet anyway. Though we gave it one more try as I watched both girls swimming toward shore, and my young uncle dashing into the water to save the day.

By that time, I swallowed quite a bit of water, and wondered about my own capsize. One more deep breath, I sunk beneath the grey surface, my heavy arms, heavy as lead, swung forth in long scoops. In abandoning ship, and losing the girl, I began to see my life passing before my eyes. My lungs ached, and all I could think, just when I thought life was beginning for me, it was ending. What would she think when she learned I succumbed to Poseidon’s wrath, punished for being an unworthy seaman, and to God for lying about being a good Boy Scout. There was honestly fear of having that merit badge scraped off my sash in front of the whole Troop. I would have deserved it for not wearing a life jacket.

My lungs began to burn, and I didn’t know how much farther I could go. Then, as if by some miracle, my legs floated down and I touched ground. Using my last bit of energy, my face broke the surface for a last gasp, then walking a few more steps toward shore, I realized I had kept the grim reaper at bay for one more day. I was saved. I felt like the Swamp Thing emerging from the murky depths to seek out the repulsed female lead, an enormous ape King Kong helpless and captivated by Ann Darrow played by Jessica Lange. Attracted by forbidden fruit, she couldn’t look away.

While my uncle dragged the red boat safely to shore, and my brother and his friend stalked off to get some hotdogs, I was left alone in my walk of shame. There she stood on the shore, waiting to see if I was OK, her brown eyes growing wider, and a small, but discernable smile arching up into cheeks still laden with baby fat. Seeing this betrayal, her brunette friend pulled her arm as if to save her from doom.

Later in the day, after all the fun and adventure I could stomach, we began to load the car for the ride home. My mind turned to evening fireworks, lighting punks and sparklers, and seeing the mound of Black Cats crackle on the street in front of our house. She came before me in front of her defiant blaming friend, and as my friends stood between us, ridiculing my failed efforts. “There’s your girlfriend,” my brother said. “Why don’t you go say hi.”

I didn’t need to. She put her hand in mine, leaving in my palm, a folded piece of notebook paper with her phone number. Taken aback, I tried to act cool, and stuff it in my pocket like it was nobody’s business. Walking back to her friend, she peaked over her shoulder, leaving me one last portrait, then she disappeared, forever. Fireworks went off in my head. As for being cool, that didn’t happen. In my true nature, I’m as nerdy as they come. There’s a reason my brother called me a book worm. He saw what happened, and held out his hand. “Let me see it,” he demanded. I reached into my pocket, proud to show him my momentary conquest. He took the piece of paper, eyed it, then tore it into pieces, and said, “probably wasn’t even her phone number, dick weed!” He cackled as mom and dad asked if we were ready to go.

Mom squinted under her sun hat, and dad took a swig of his last beer. Like my spirit, the hot summer sun sank lower and lower. I thought of the parallels between me and America, me asserting my independence against my older brother (Great Britain) for the first time or as he would say, growing balls and hair on my chest. I took a risk without him goading me.

Now, approximately 40 years later, on the eve of another Fourth of July, I want to tell him, to tell the world, I got my girl. We spent the day at Lake Minatare, remembering the charm and excitement of those days as teens, a tender age when the roads and days were long. We floated in the cool water watching the clouds go by, while our dog Charley frolicked in the shallow waves, and the motor boats keeping their distance beyond the buoys. I found after all these years, after canoeing through turbulent waters, I have my love amid this brilliant lake view.

One thought on “Lake view on the Fourth”