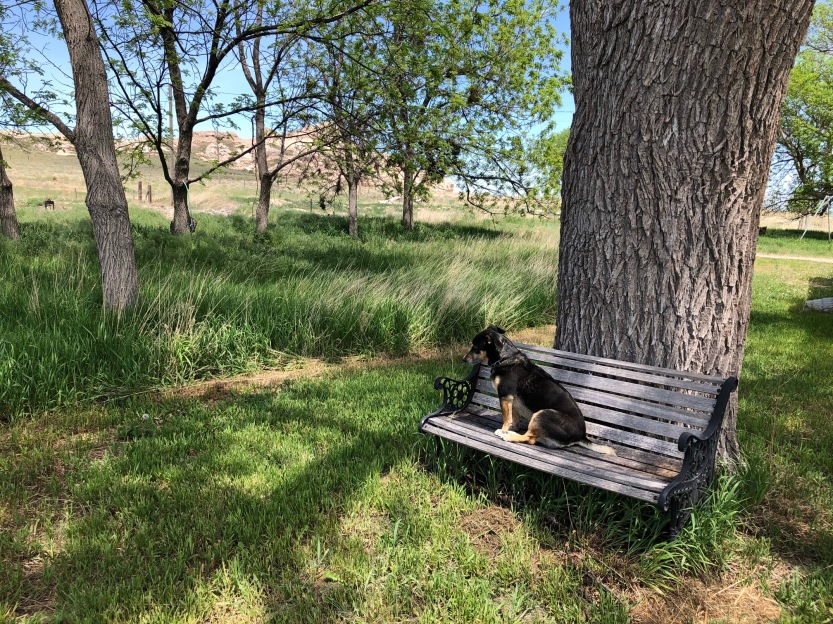 Called to be in a natural setting, I am here, facing the west, Dome Rock to my right hand, deciding to observe the song(s) of nature. Bootsy, one of our cats, wearing a Tuxedo coat wandered over to the side of the house, lounging in the shadow of the propane tank, while Charley our great friend and companion, I’m not sure what type of dog, gallops around the yard, most likely in a state of glee. I can tell by his smile.

He thinks it does not matter what type of dog he is, and we, Lisa and I think the same. This is not about earthbound identity. He believes in his life straightforwardly, like many of the other creatures that surround us here. To them, there is no such thing as deceit, and they do not expect it of us. It is only under trial that we discover this. In combat, for example, being in synch with fellow soldiers means life or death; does it not? Then trying to understand why larger forces at work, in the world, have decided to take advantage of your good nature, may be an effort wasted.

There are simply different levels of greed, and yes, like the chief of a small tribe in the Yucatan, featured in Mel Gibson’s film Apocalypto, said, in 1500 or thereabouts, do not let the disease of fear infect you. There are simply takers of life and fortune. You are part of this world, and therefore must learn to work within it, not to subjugate it or others (slavery), as some would like to believe. I’m pretty sure God said you DO NOT have dominion. Most likely, he meant take up domicile here. That is, build your home among the other creatures, and by all means, get to know them.

Noah did not report that all of the world’s creatures were beneath him, as in, only Man holds privilege, suggesting a pre-ordained and Godly right. Do you believe this in your heart to be true? If false, then… It is better to work in harmony with everything around you. A hornet does not hate, much less want to kill you. During this part of the musings, a butterfly floated across my gaze to perhaps prove God’s point. His path may seem erratic, orange and black wings fluttering haphazard, but his journey is not. Instead, it is as intentional as when you brush your teeth in different directions, hoping you didn’t miss a spot. What the butterfly says to you, is not only in his form, but in the short life he will live, in the same way, we know when death comes calling, and all those things we were meant to do, come flooding into our minds, as regret, or merely as not having the chance to fulfill those tasks which seemed most important at the time of signing our contract to reenter this world.

Subtle reminders such as the butterfly come into view, but we must be willing to see the signs. It truly becomes a “nice day” when such conversations can be had, as though they were a means of correction for our waywardness and distraction. There is nothing more important than to listen, which requires shutting our mouths, reducing the noise. This skill cannot be underestimated, when even the smallest of questions can be answered.

Feeding the birds came as a message to Lisa, who thought all she would do is watch our feathered friends land to feast, gathered together in a multiplicity of vibrant colors, and that would be our reward. The live painting as it were. Intentionally we have brought them to speak with us, to join us in our quest to become more harmonious, and more peaceful. This requires the actual absorption of their clicks, tweets, chirps, whistles, and flutters, to say the least. A black bird with turquoise plumage around its head lands on a nearby branch, to let me know he’s here, he’s arrived, and asks if it’s OK, he’d like to eat, and rest for a spell. Some of the air of this world tastes foul, and at this juncture of his journey, we have offered up this haven. Believe me, the oases are few and far between.

Could they be? Two doves alight on a separate branch—the feel of something other than the vibration generated by human beings who have little learned to hope. We must realize soon that we cannot choke our world with a noose of negativity, or turn the gun on ourselves, because we feel that’s what brings us to protection and safety. We cannot hide away, nor run away. Little do most of us realize that nature when called upon will come to our aid. We need to believe this fully within our hearts. For if we fail in this connection, the cavernous abyss awaits us, for our souls to begin the journey anew, a long repeatable pilgrimage to our Maker, for He alone allows this wonder.

When we look out into this world, it is but a mirror, something we have shaped of ourselves for ourselves. If it should bear cancers or luminous skin, then we know why. Instead, some of us, have sat in circles, clapping our hands in mud, yet though it might be fun, we know that we are not stuck in that mud, whereby value what your brothers and sisters perceive, for it will aid you in your own journey.

There is a price to pay for the damage you do, for all of you. Now that you know some more of the so-called facts, how is that you will react? What you hear is science, though it is theory, even the laws of gravity. You were meant to fly. What kind of hope? Do you close your eyes and HOPE that it all goes away?

I see that I must be the alpha dog in this family, as the fur-born friends draw near to see how I will lead them, yet that is me and my ego. Their presence? What it amounts to is their pledge as a friend. They will be loyal beyond a shadow of a doubt. I will see me through until the day that they are no longer here, and we will see each other again in other worlds.

Meadowlarks begin their afternoon patrols, a familiar song. Other winged creatures talk through this maze of song(s). Do not just listen. Feel. It’s like asking, why do you speak? Just to be heard? You must say how you feel, and that I am. I exist. I am here. Acknowledge my being. Do you see me? And to the hairy spider who crawled up my leg, I give a resounding yes, and then I gave him an equally emphatic swipe, and sent him on his way.

The bench I sit on is not that old, but it has seen the most spectacular sunsets, alone, through winter frost, and the gentle grasses of spring, crowding its feet. Does he marvel at the dream that is life? His metal braces, may someday rust, and give way, leaving the remainder of his bones, the wood from which he was made, back to the Earth which gave him life. But for now, together, we spend this present moment, perhaps refreshing our minds with these basics.

Yonder, another dog barks, from across the valley, though I have never seen him. Does he anchor this distant vision, or is he merely a projection of mine, part of my musical composition, my symphony, if you will? While words he may not know as well, but the world he does to the point that he feels assured. None of it will deceive him. And, if his human friends should leave him tomorrow, he will feel the imposition, but find the next steps in this grand adventure. Not that he is lesser by any means. His wisdom already has a good foundation. His keener sense of spirituality will lead him to where he is needed most, or he will be given notice that his contract has ended. In the interim, for each breath, he is grateful, for it is up to us if we believe Earth to be boundless, as a mirror of our true self, or that our vessel traps us to this very rough place, some have likened to a prison.

Choose your thoughts carefully. And each shall form in such a way to treat you, perceived as pleasure or pain or peace. Your state of being must be known; your cards already are on the table, ready to be played, to be displayed. Where is the lesson if you know each card, but if this game does not suit you, you may find another table on which to play?

And, the world will let you know.

One thought on “Musings from a bench”